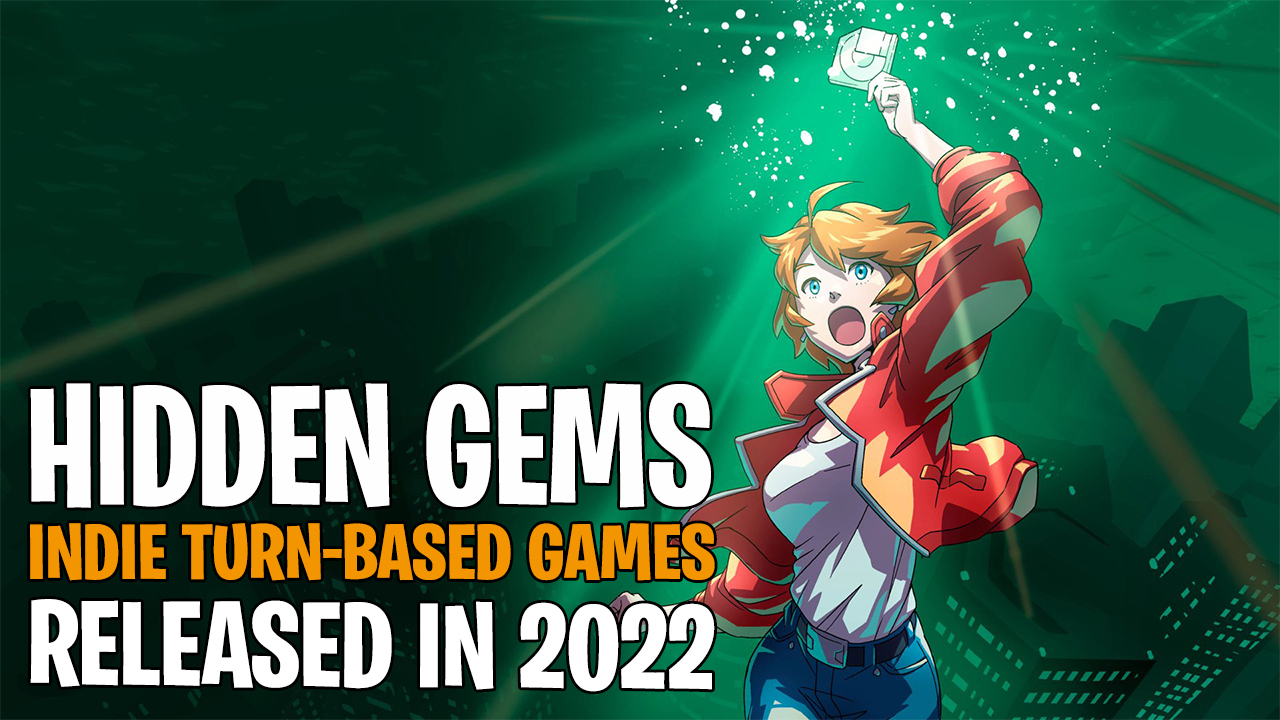 Once again, it is that time of the year when every single big game under the sun releases. It is also that time of the year when we, as gamers, reflect on all the games we played, and what we would like to play in the final two months of the year. For some, they already know what those games are, whether it is finishing Mario and Rabbids on Switch or waiting for the release of Midnight Suns, most have themselves set for the next month or so.

But if you are still undecided and looking for something different to play for the holidays, maybe these 10 Indie hidden gems released this year will catch your fancy.

What makes each of these games hidden gems? Every single one of them has less than 500 reviews on Steam, some even under 100, but what they all have in common are mostly positive reviews from all that have played them. Some I have played, others I haven’t but have heard good things about. Whether you need something short, something different, or all of the above, you may find something you never thought to look twice at.

Live By the Sword: Tactics

Live by the Sword is a turn-based tactical game which released about threeish weeks ago. If you are someone that loves the old-school tactical games that were available on DS or Final Fantasy Tactics, then you will be right at home with this one. The game is littered with a variety of game modes to keep players interested, including Story mode, adventure mode, tactician, multiplayer, and skirmish. As I have personally played this one myself, I can highly recommend it.

I warn any gamer that does decide to go with this that the story mode is a tad meh, but you will need to progress to at least act one to unlock Adventure mode and act two for Tactician mode, the highlights of the game, especially Adventure mode which is like an extra roguelike game within the game as well as that the developer already has a roadmap of free content coming to the game in the coming months like extra characters and more for Adventure mode.

Another game on this list I have personally played, and like Live by the Sword, has under 20 Steam reviews, with nearly all of them being positive except for one, which isn’t bad in my books. If you haven’t heard of Video Game Fables before, that is understandable, as it most likely flew under most gamers’ radars, even mine, until recently. Video Game Fables is a tongue-in-cheek turn-based RPG inspired by one of the greatest comedic RPGs ever, Paper Mario.

When the princess of the kingdom is about to be kidnapped by the bad guy, it is up to the hero to save her, except this doesn’t happen because the script gets completely turned around thanks to the Forsaken Princess. Now it is up to the Princess, an NPC, and the Villian’s son to set things right. With fourth-wall-breaking jokes, colorful graphics, and a lighthearted story (which is a nice change from doom and gloom), Video Game Fables is a must-try for anyone like me who is also looking for a new game that is like Paper Mario.

Fhtagn Simulator is a Lovecraftian-inspired deckbuilding roguelike. It mixes all the elements you love from a deck-builder and puts you in the world of Cthulhu. From the game’s description, it is inspired by Slay the Spire and Monster Train with its spin on the genre. Cards are set in a roulette, which looks similar to Rings of Pain, except the roulette is used to your advantage as you put the cards you want to use.

I personally haven’t played this game, but it does have under 200 mostly positive Steam reviews. Most of the reviews praise the gameplay and Lovecraftian vibes the game gives out. Some of them also mention its similarity to games like Rings of Pain and Inscyption with cultish vibes and no fights. While it is mostly positive, most reviews mention that the translation is off, but in the end, it is still a great game.

Another game with under 200 Steam Reviews, but unlike Fhtagn Simulator, Floppy Knights has been out for a while now and is even on Game Pass, which may mean more people may have heard of it. The reason it still makes this list is the fact it could have been overlooked by most. Floppy Knights combines turn-based tactics with deckbuilding elements to create a unique adventure about a young girl and her robot arm, as they do odd missions in an attempt to save up enough money to move out of her parent’s place.

This is one I had the pleasure of playing back when it was first released but sadly forgot about it until recently. Floppy Knights plays like an Advance Wars-like game, but where it differs from most of them is the player has to consider the cards and use them to their advantage. Cards control everything from movement to attacks and even the special abilities some of the characters have. From what I played of the game, I enjoyed it; it offers a unique spin on the genre, and I am personally looking forward to going back to it.

This is the only game to have more than 300 Steam Reviews on this list, which means it has had a tad more gamers play but not that much more, giving it a place on this list. Jack Move is a turn-based RPG set in a cyberpunk world with modern pixel art. Playing as Noa, an up-and-coming vigilante hacker; players explore the city, of Monocity One to find leads to Noa’s missing father. She will be plunged into a world of murder and Evil Corporations, the stuff of nightmares.

While I haven’t played Jack Move yet, this game has been on my Wishlist. Like many of the other games on this list, Jack Move has mostly positive reviews. Steam reviewers have praised the game’s storytelling, gameplay, and soundtrack, making it a fun and digestible RPG at around 10 hours or less. The only downside for some is it may be too easy.

Sokochess is a minimalistic puzzle game using chess pieces. In Sokochess, you play as the white pieces, and your goal is to push the black pieces to their destination. The twist here is the black pieces won’t move unless you allow them to attack one of your pieces.

From the reviews on Steam which are currently all positive, this game is chess with a twist, and players love that is a puzzle game that also attacks the player, which is something new. They also praise its price and the amount of gameplay you get for it.

As someone who loves everything Kaiju-related, I am disappointed this game has flown under my radar. That’s not to say I hadn’t heard about the game before, it’s just I did not know it was already out. Luckily, I can fix this by adding it to the list of hidden gems, especially because it has under 200 reviews which is sad for a game with Kaiju attacking cities, turn-based strategy, and lots of destruction in it.

So, what are the reviews saying about Kaiju Wars? Great Kaiju humour with memes and more, in-depth tactical gameplay, and, best of all, it contains a full remake of Godzilla 2 from the NES. From all the reviews alone, it does sound like something fun for any Kaiju fan, with 60 missions and multiplayer. Although, most reviews do say to give multiplayer a miss as it isn’t as fun.

My Master’s a Moron

My Master’s a Moron is a 2D turn-based, tile-based roguelike dungeon crawler. In the game, you explore your master’s basement, which happens to be rented out by monsters for some weird reason. You will explore three different dungeons, all in pursuit of killing that moron master of yours.

Of the 18 people that have reviewed it, most have loved it so far, with most players touting the game’s humour as one of the highlights. Not just that; the gameplay is addictive and easy to jump into for players looking to enjoy when they have a spare minute. Although, it could be too linear for some, but does sound like the perfect game to play while on the job… wink, wink.

the heart of darkness

I am not one for Dark Souls or even Dark Souls-like games, but knowing there are a lot of gamers that do enjoy the genre, I thought it would be good to add one, especially as most gamers (me including) have never heard of it. The Heart of Darkness is a turn-based RPG set in a cursed Kingdom. The game lets players pick their character from five origin stories, with multiple classes available and quick turn-based battles.

The final game on this list is none other than Potato Flowers in Full Bloom, a classic 3D dungeon crawler RPG. Explore a labyrinth as part of an expedition crew seeking special crop seeds, left in the labyrinth by a bunch of Alchemists. What makes these seeds so special is they can grow in corrupted soil, aka the world’s soil in this game.

If you want to get into a 3D dungeon crawler, then you are in luck as just over 200 gamers have reviewed this hidden gem, with most praising the game’s length and gameplay. It is the type of game you will play for hours and then forget where the time has gone. The only real downside is the story as there is not much of one.

And that brings us to the end of another list. Are there any hidden Gems you think should be on this list, are there any on this list that you are thinking of picking up? Let us know down below.