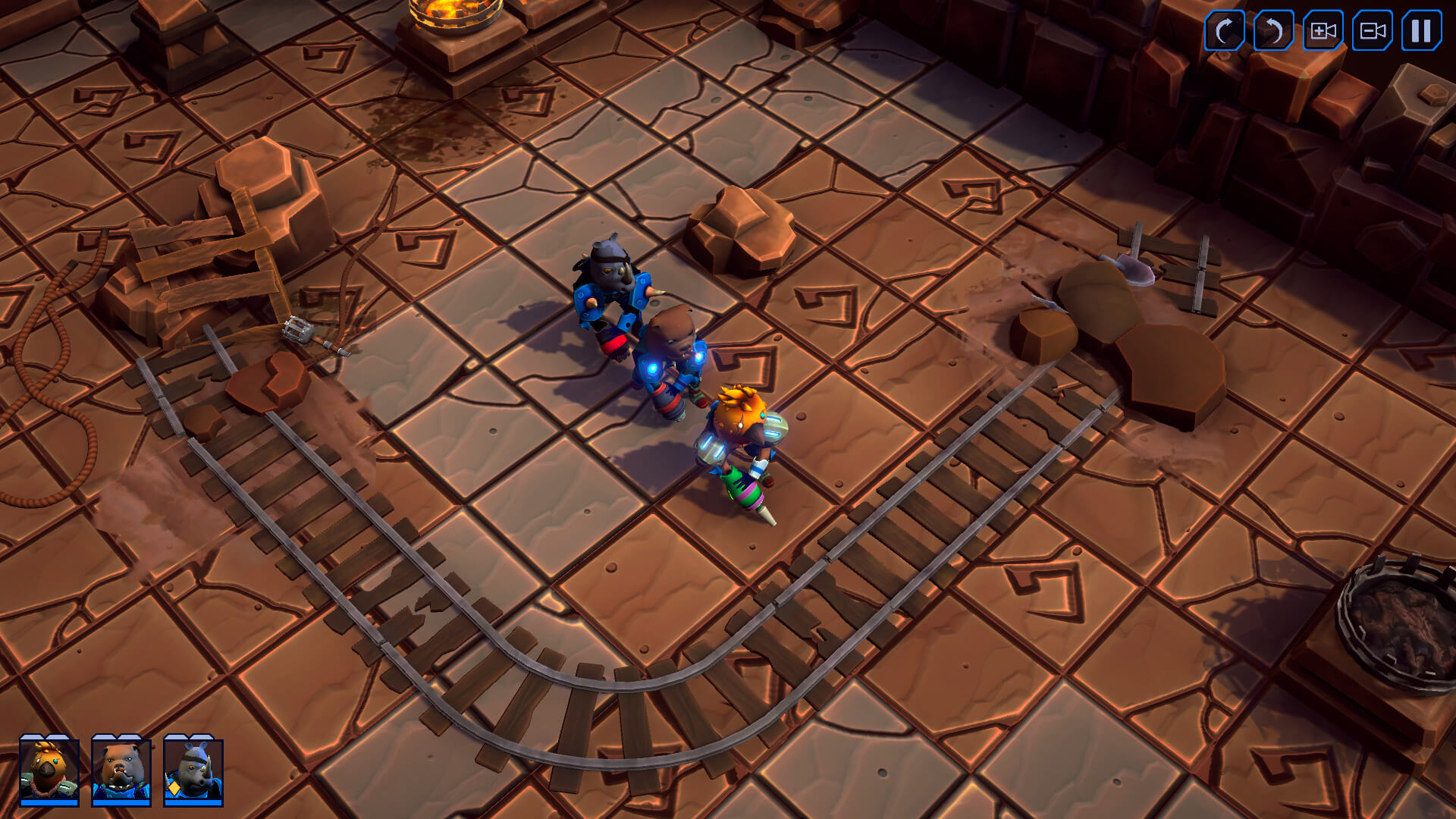 Today we are going to talk about Ruin Raiders, an interesting game developed by the Spanish studio OverPowered Team (OPT), and published by Freedom Games. Belonging to the roguelike genre, turn-based strategy and peculiar touch of action; which is now fully available on PC and Nintendo Switch. The game left me with a rather peculiar first impression and is appealing both visually and mechanically. Well, without further ado, let’s see what’s in store for us in this strange adventure my beloved Raiders.

Ruin Raiders has its origin in a world of anthropomorphic cybernetic animals fighting against various machines, such as Flying Drones, Humanoid Robots, or Battleships. Where does this happen? Inside the ruins of an ancient civilization. These animals are known as Raiders, which enter the dungeons with the idea of collecting resources, quite limited to send them to their headquarters. What is the name of this precious resource? Nothing more and nothing less than Entium; we’ll talk a bit more in-depth about it later on.

As you’ll see, in a nutshell, the game doesn’t seem to have been developed with the intention of putting a lot of emphasis on narrative, at least that’s the impression I got from the OPT team. Even though we have different characters, they don’t even have a particular story, which results in not being able to engage with them or the story.

Well, Ruin Raiders features a fairly short tutorial, but with the basic explanations to get you familiar with the game as quickly as possible; mechanically speaking. However, you don’t get any explanation of what happens next. Despite that, we’ll find ourselves with a sort of interactive base where we can perform actions that will be of utmost importance before starting each run. This is where Entium starts to be of the utmost importance since without it we won’t be able to improve anything in our base. These are the structures you will find out in the main hub:

First of all, in the cavern, you will be randomly presented with 3 Raiders of the races you have at your disposal. You will be able to choose which one to keep and which one to change, you will have a breakdown of the stats each character has, as well as the skill available to use in battle [Plus: The effect of the skill is explained]. You can also change the name of your Raiders if you wish. I guess they wanted to give a touch of identity and familiarity to each player’s experience. After all this, you can enter the ruins to start your adventure (run).

Once inside the ruins, the first thing you’ll find is a shop where you can buy gear, medical kit, grenades, etc. I always recommend buying the medical kit as it will be a great help during the run. The movement system is like an adventure game where you can move “freely” between rooms, there are very simple puzzles to do, such as opening chests, pressing buttons, or finding Entium in glowing squares. Whenever you enter a room with enemies, the battle will start automatically; there is no pre-phase, your raiders are placed at one end, while the enemies on the opposite side are placed across the room. The first turn is always yours.

Each Raider has two action points that can be used as follows: Use both points to move a greater distance, move and attack when using a light firearm, using heavy firearms require both action points; take into account that reloading the weapon will also count as an action point, it’s something you’re going to have to do compulsorily since if this action, you won’t be able to continue attacking your enemies. One of the disadvantages is that there is no way to cancel the action you have chosen if you want to rethink your strategy. Also, each raider has unique abilities, for example, The Bird can recover an action point for a nearby companion, the Rhino can generate 3 points of armor for himself etc.

A plus point is that there is an option that allows you to increase the speed of the actions performed by your enemies, certainly for a Roguelike game is very helpful.

I think the worst thing I could find in the game is that while exploring the rooms, you might have the misfortune of entering the room where the Boss is located earlier than expected, which is certainly quite complex in difficulty.

Ruin Raiders is a game that meets its goal but certainly falls short compared to other games of the same genre. If you like cartoon-style graphics this game is for you, it is worth mentioning that the concept of anthropomorphic animals reminded me a lot of Star Fox, those of the old school will understand me. However, I wouldn’t recommend it if it’s your first time dabbling in the genre.