“Oh no, not another roguelite deckbuilder” you might say while perusing the store page. What makes it different though? Why is it worth looking at?

Basically, I’d describe Vault of the Void as a “non-deckbuilder” game as it works differently than most. Instead of adding and removing cards from your deck as you go along in your run and that’s it, Vault has the player using a 20-card deck throughout the whole game. However, you are able to exchange cards in your backpack and your deck at any time outside of combat. This allows you to mold your 20-card deck for the various encounters that you face. Furthermore, you don’t have to agonize over adding cards to your collection because you have the freedom to use or not use whatever you want. 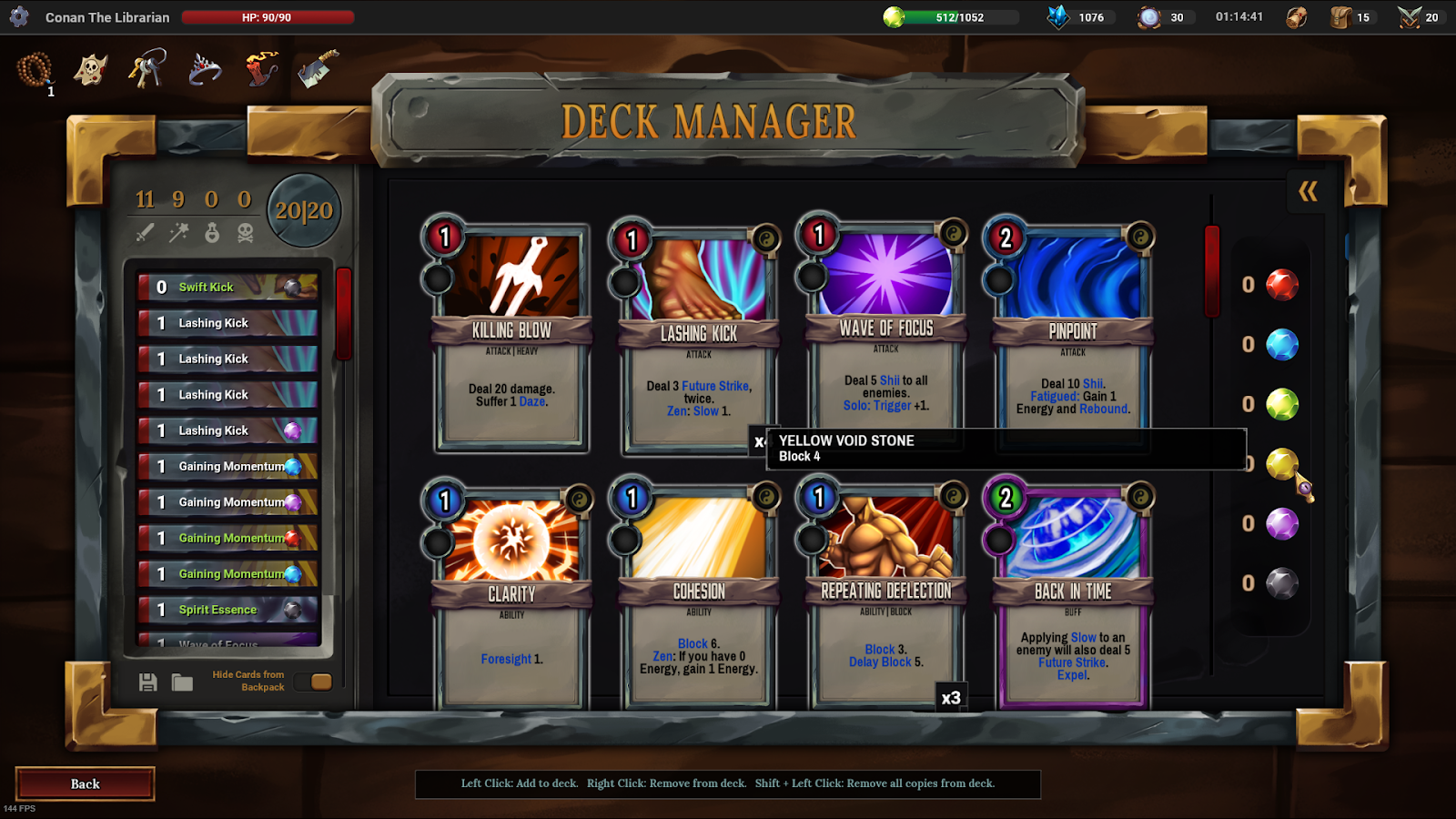 Like most card games of this nature, you’ll have opportunities to improve your cards. In Vault, you can do this in two ways:

So, not only do you have a 20-card deck to play around with, you can tune the cards themselves a little bit to your strategy.

Upon Early Access launch, Vault has three characters to use, and more coming in the future. 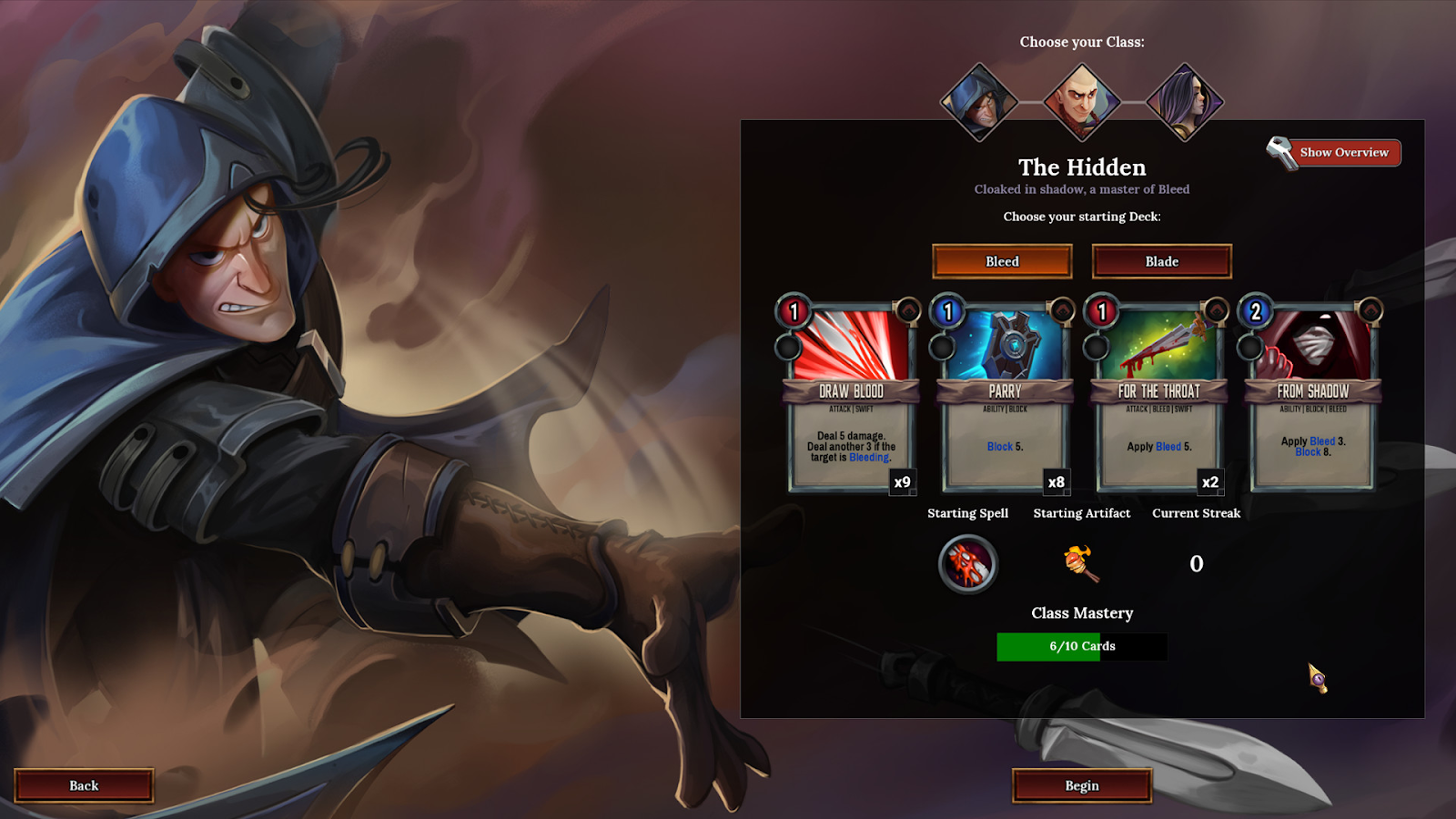 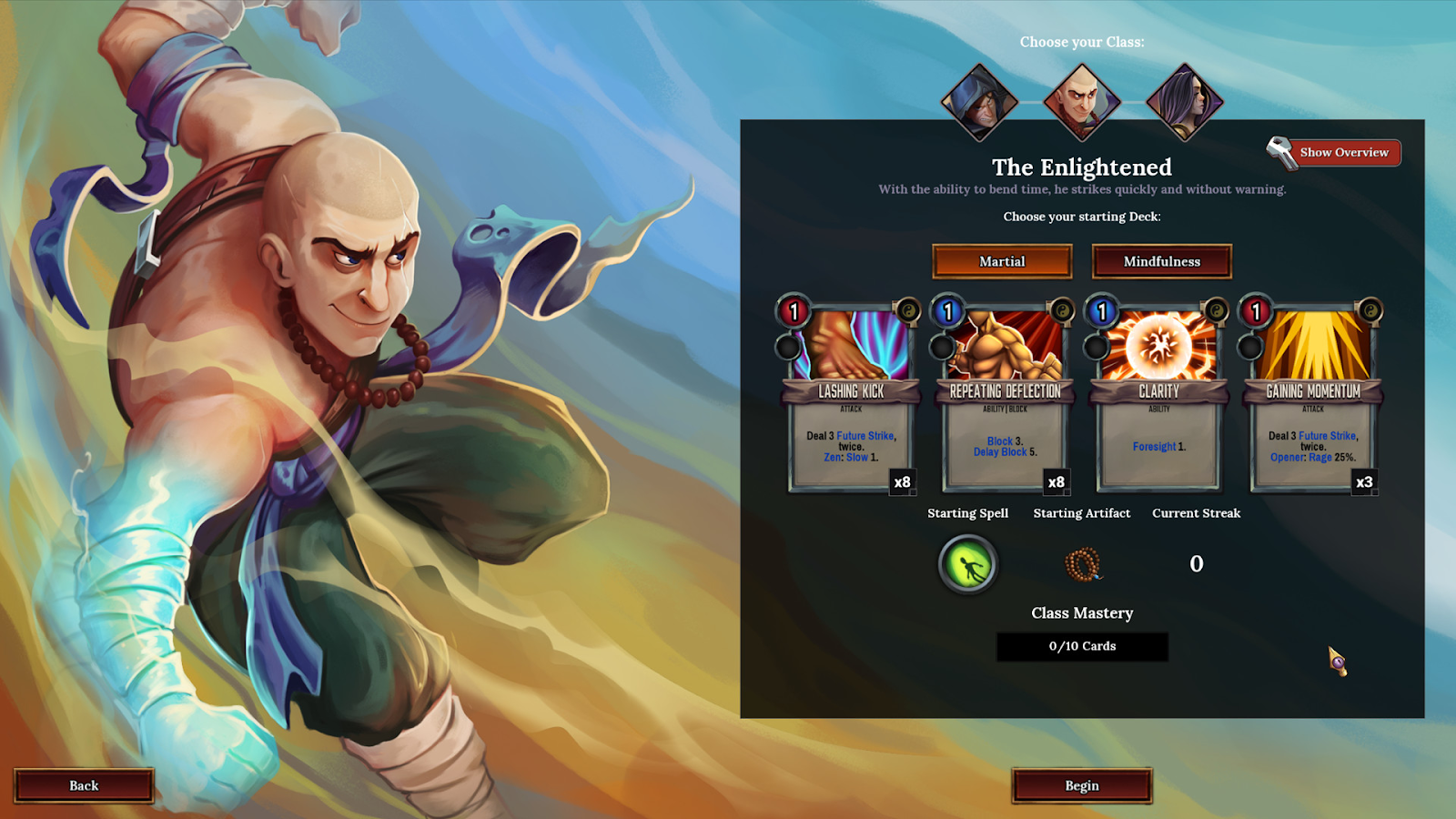 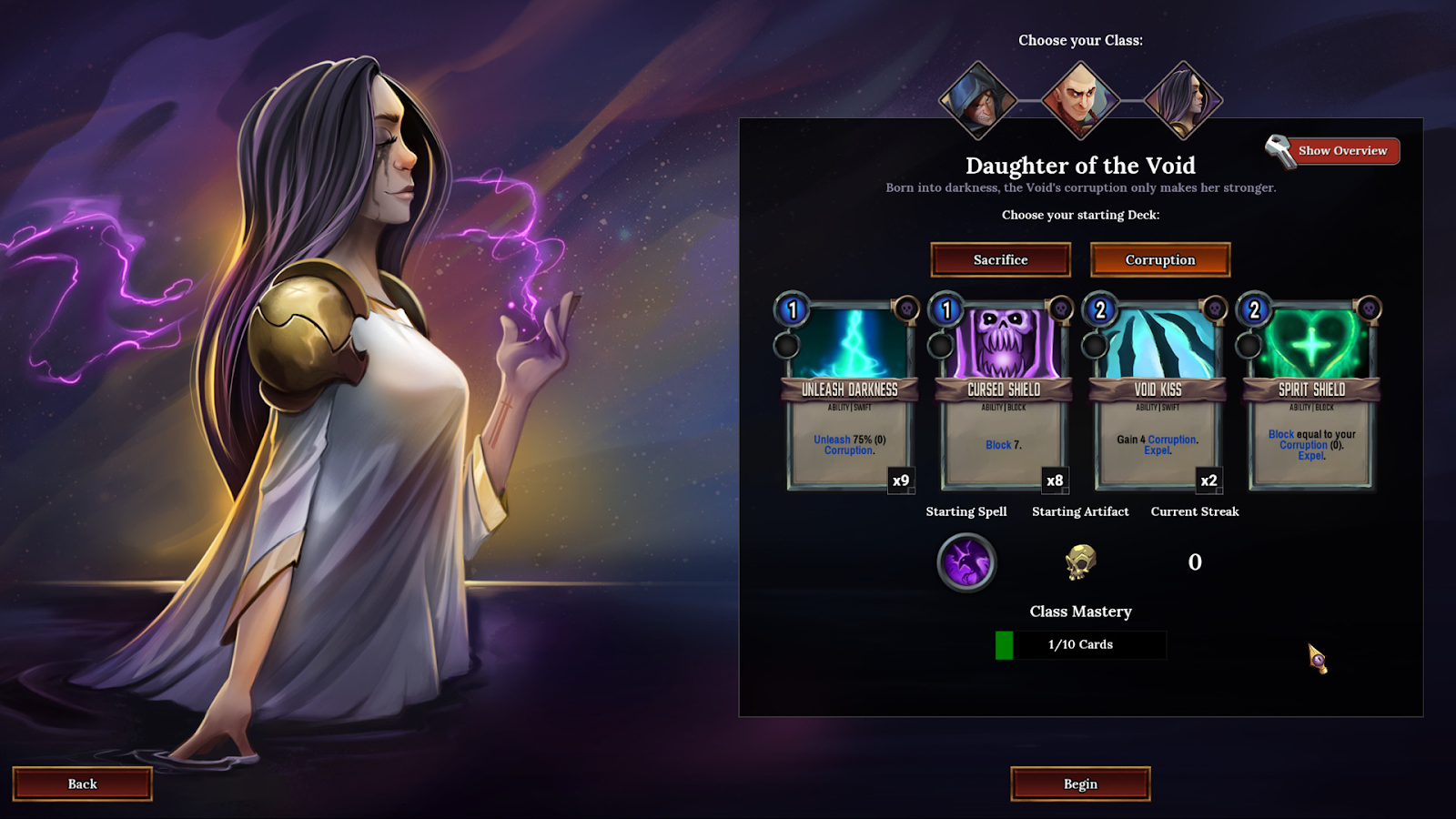 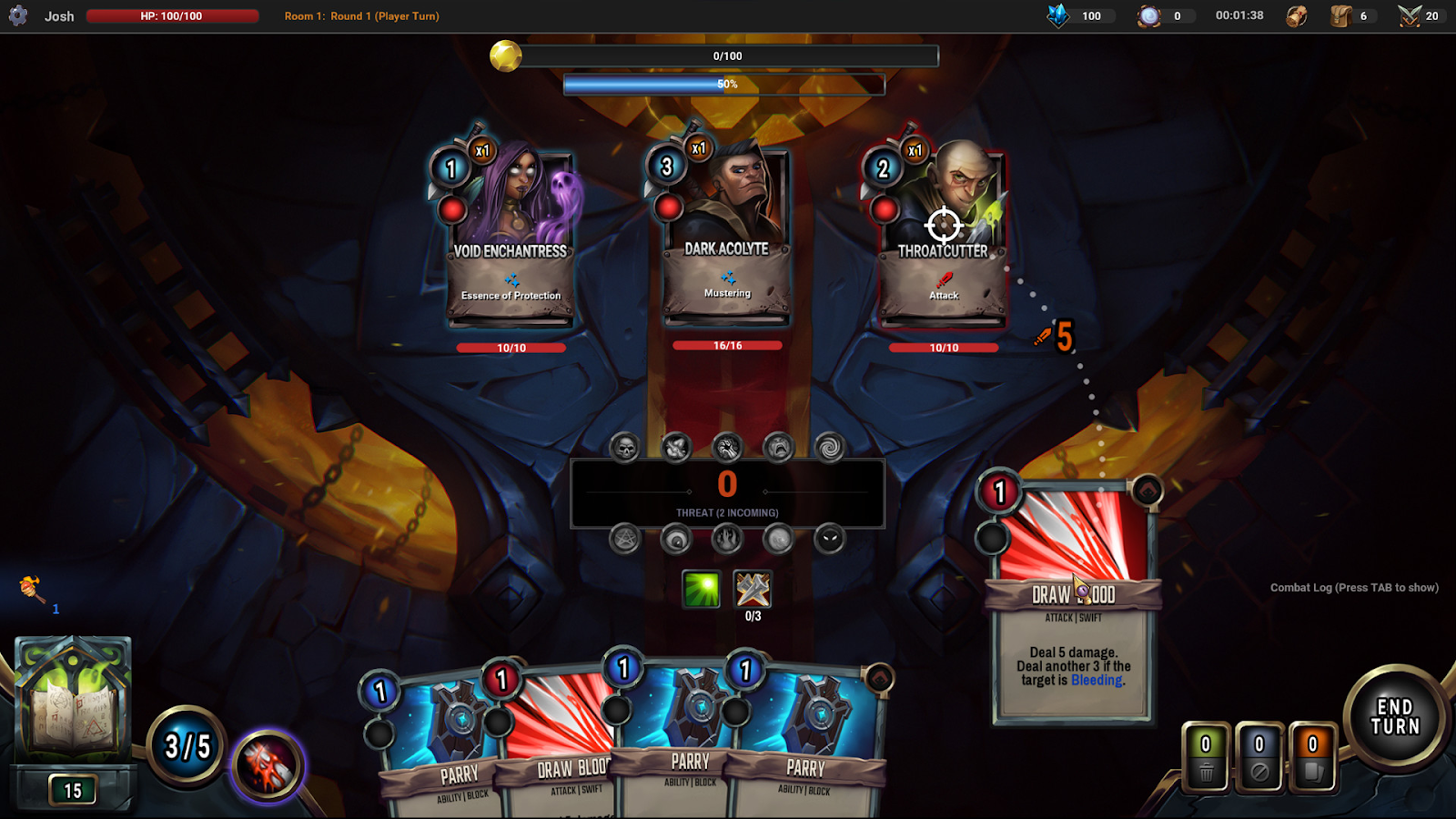 The fights in Vault feel familiar, yet have a lot of getting-used-to in the fact that blocking enemies’ damage is a bit more [i]reactive in nature as opposed to immediate[/i]. For example, let’s say an enemy will do 5 damage to you. Instead of playing a block card immediately, you have to wait for the enemy to take its turn, and when it attacks, 5 damage will appear in your “Threat Pool”. Then, on your turn, you can play block cards to remove threat from this pool. Any threat leftover in the pool at the end of your turn is then taken as damage against your character’s hitpoints. Note that while reactive is the norm, there are still some “proactive blocking” available in the game (especially on the Enlightened, being a Time Monk n such).

Energy is also handled differently in the fact that you start with 3 on turn one, get 2 each subsequent turn, and have a normal cap of 5. One of your primary ways of getting more energy, however, is through a “Purge” mechanic where you discard a card to gain an energy. Not only this, but both energy and cards-in-hand are retained at the end of each turn. The catch, however, is that you only draw back up to your hand limit (normal limit is 5 cards) each turn, so every card you choose to retain is a potential energy that you missed. 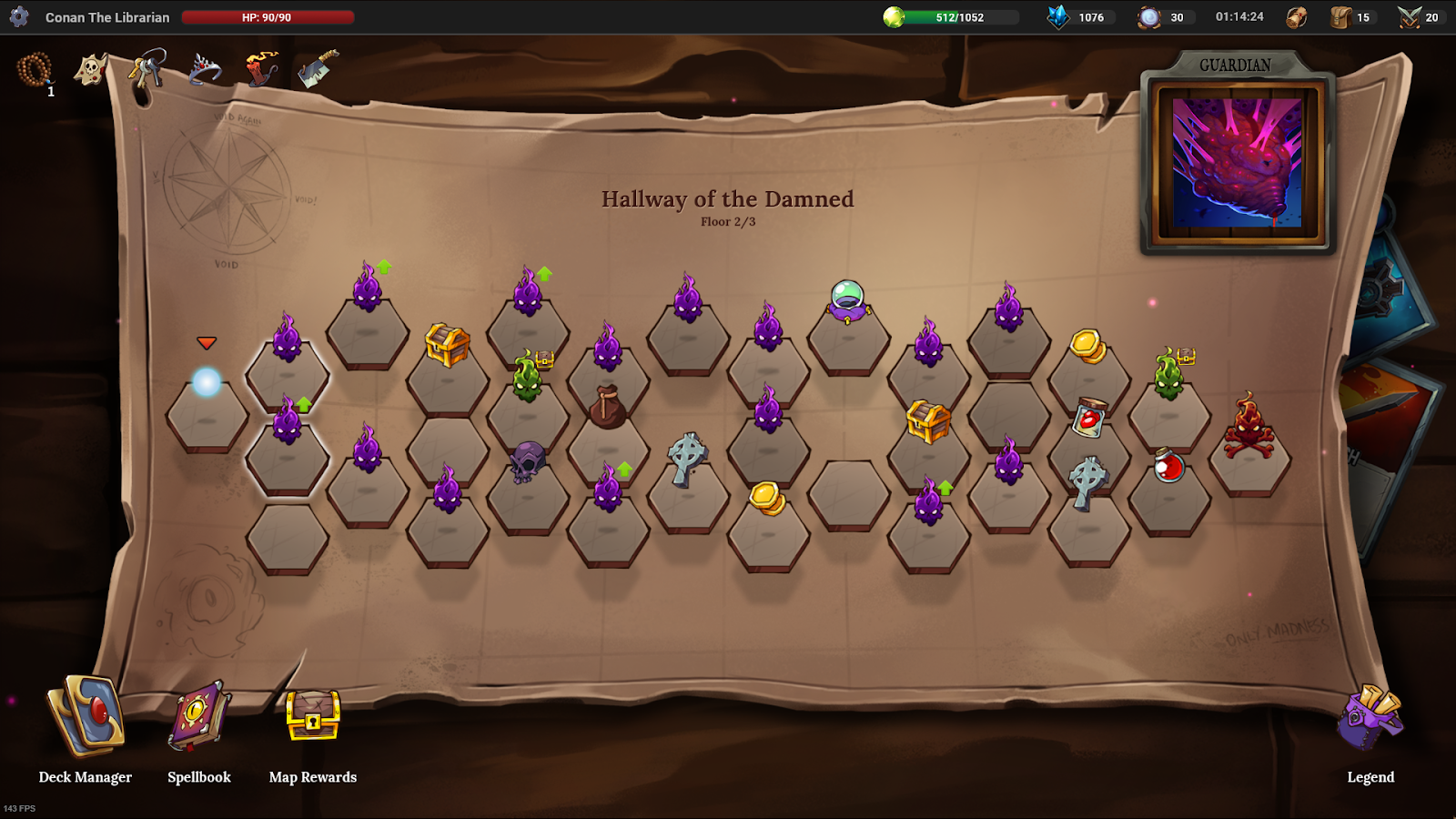 Vault’s map is a bit different compared to the others. While most games have specific-choice pathways, Vault’s is relatively open at first, however, each step you take can eliminate options on where you can go. As a result, you’ll probably want to plan out your general pathway across the map early on so you know what you’re doing. Unlike Slay the Spire (et al) where you have a lot of guesswork about the map, Vault’s map actually shows the card reward on each battle encounter spot. This allows you to make much-more-informed decisions on “where should I go anyway?” Of course, there’s still info not shown, such as what artifacts are in the shop, and other things, but it still gives you a lot to go base your plans around.

For the format of a run, there are two normal floors, each which end with a powerful boss monster, and the ending area of “The Vault”, where The Void resides. To challenge the Void, you have to defeat two Vault Guardian encounters, in which you have a choice from four. I quite enjoy this as it allows me to tackle the mini-bosses which I think I could work best against.

I think that Vault has a lot of cool and fresh ideas, and for fans of the roguelite deckbuilder genre, they’ll appreciate the different flavor that’s offered compared to “just another Slay the Spire clone”. While there are some meta-progression systems, they’re overall quite minor and not the focus of the game. Some games put a heavy emphasis on these and basically tell you “Haha, if you want to succeed at this game, you’ll have to do a dozen runs to unlock bonuses before you can win!”, meanwhile, it’s quite possible to win a run on Vault quite quickly as you start getting a feel for the game. The learning curve may be a little more significant due to how “different” this game is; still, skill is key, not grinding.