Home Lists What to play after Persona 5? Here are the Best Modern JRPGs 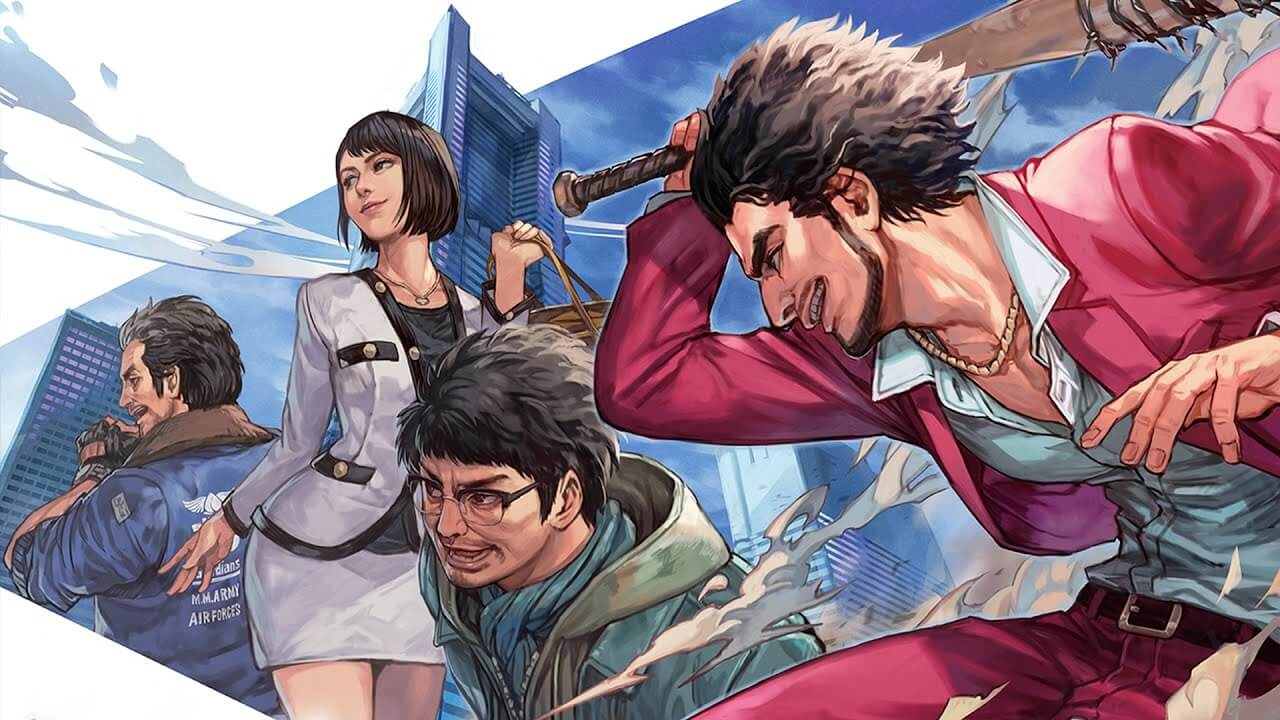 With the release of Persona V Royal Edition to new platforms, some lucky players have gotten to do what many of us wish we could do again; play Persona V for the first time. No doubt you approached the final battle with a level of regret, not wanting the game to be over. That’s okay, though – there are tons of quality JRPGs to try now that you’re finished!

Of course, after playing a game like Persona 5, you’re probably feeling spoiled – not just any old JRPG will do. Try one of these excellent games; they’re among the best of the best from recent years!

If Persona 5 left you wanting more demon-battling action, you can’t do much better than Persona’s sister series, Shin Megami Tensei. SMT has a darker tone and higher overall difficulty than Persona, but boasts just as much depth. Be ready for a long campaign with multiple endings, and you’ll be able to fill up a hundred hours or more!

Shin Megami Tensei V is the latest game in the series, and is an excellent starting point for new players. It’s the best-looking entry in the franchise as well!

Players looking to capture and collect monsters will no doubt be excited for the upcoming Pokemon games, but Temtem is a lavishly-imagined alternative that can help you wait out the time before launch or try a different game instead! It’s the closest thing the world has ever seen to a proper Pokemon MMO, letting players explore in search of monsters to capture and battle together!

Naturally, Temtem is built with multiplayer in mind, but the main storyline is plenty of fun in its own right. The game’s battle system is just different enough from what players are used to to make it feel fresh and exciting while still comfortable. Temtem only recently came out of early access, so now is a great time to start your journey!

Get Temtem on Steam

Get Temtem on Switch

Get Temtem on XBox

Get Temtem on PlayStation

While it may not have the legions of fans Persona has garnered, Tactics Ogre is still beloved as one of the most important tactical RPGs of all time. Many games over the last twenty-odd years have taken inspiration from this classic, so the new remake is a welcome sight for longtime gamers.

Whether you’re playing Tactics Ogre for the first time or returning for another go, Reborn is a great choice for players who want deep strategy and a compelling storyline.

Get Tactics Ogre: Reborn on Steam

Get Tactics Ogre: Reborn on Switch

Get Tactics Ogre: Reborn on PlayStation

One of Persona’s charms is its high school setting, blending teenage drama with epic magic. Players looking for more of the same might be interested to try the decidedly-more-chill Ikenfell. With a team of six students at a magic academy, players explore campus, battle monsters, and get to know their classmates.

Ikenfell is less anime and more The Owl House, making it a fun and heartwarming romp. It’s a great choice for players looking for JRPG gameplay and story without many of the more stressful elements.

Octopath Traveler is a wonderful blend of classic and modern JRPGs. Following the stories of eight unique heroes who come together at journey’s end, it gives players the freedom to play the chapters in any order. Fans of old-school PS1 RPGs will feel right at home in Octopath Traveler’s 2.5D environments, and the elemental combat offers a surprising level of depth.

Get Octopath Traveler on Steam

Get Octopath Traveler on Switch

As far as JRPGs go, it doesn’t get more iconic than Dragon Quest. The original formula has held up over the decades, and Dragon Quest XI blends classic gameplay with top-quality Square Enix visuals. Of course, if you prefer the retro look, the Definitive Edition includes a 2D mode that lets you trade in polygons for pixels.

JRPG fans love their challenges, so if you’re looking to flex your menu-based muscles, Dragon Quest XI has customizable difficulty. You can craft your adventure to be just as hard (or not) as you like it!

Get Dragon Quest XI on Steam

Get Dragon Quest XI on Switch

Get Dragon Quest XI on PlayStation

Like A Dragon isn’t a traditional JRPG, but then again, nothing about the Yakuza series is traditional. This side story in SEGA’s ongoing crime drama brings Yakuza‘s over-the-top style to turn-based battles.

The protagonist’s own JRPG fandom adds a lovely tongue-in-cheek element to the blending of styles, and helps ensure that Like A Dragon is like no other game you’ve played… though you’ll certainly hope for more in the future.

Quick, name a deep, engrossing anime-style JRPG about teenagers battling the forces of evil while managing their personal relationships! Obviously, Persona is a correct answer, but Troubleshooter checks all of those boxes as well. It’s more dystopian than occult, but if you’re looking for fully-developed characters and a vast narrative that you can get lost in, it’s a perfect choice.

Troubleshooter: Abandoned Children is meant to be only the first chapter in an expansive storyline. It’s an excellent game in its own right, but the possibility for more and bigger stories sets the series up to be another Persona.

Get Troubleshooter: Abandoned Children on Steam

One of the best-looking modern JRPGs, Astria Ascending‘s hand-drawn characters and environments are a feast for the eyes. The game’s twenty playable classes, captivating storyline, and engaging combat make it the full package for any fan looking for something to play after Persona 5.

Astria Ascending has some neat takes on classic RPG tropes. There aren’t any plucky teenagers out to save the world here, but rather a cast of imperfect adults struggling with the destiny they’ve been given. It’s a great choice for players hoping for a more serious tone.

Get Astria Ascending on Steam

Get Astria Ascending on Switch

This heavily story-driven JRPG has a very similar feel to Persona, making it a good choice for a follow-up game. It takes place in the virtual world of Redo, where people hoping to escape their past create a simulated life where they never made important mistakes. The protagonists are a group of youths who want to return home and face their consequences in the real world.

With similarly deep themes and an equally-lovable cast, you might even think The Caligula Effect 2 was a Persona spinoff. Will the story sit with you as long after the credits roll? There’s only one way to find out!

Get The Caligula Effect 2 on Steam

Get The Caligula Effect 2 on Switch

Get The Caligula Effect 2 on PlayStation

JRPGs often try to one-up one another with complex battle systems. Bravely Default succeeds by going in the opposite direction, excelling at tried-and-true fundamentals. The series’ take on the Job System is one of the best-executed in the genre’s history, and there’s still plenty of strategic depth for players hoping for a challenge.

While the original Bravely Default and its direct sequel, Bravely Second, took place in the same world with the same characters, Bravely Default II is an entirely new journey, making it a great place for series newcomers to dive in.

Get Bravely Default II on Steam

Get Bravely Default II on Switch

Persona has some serious production values, and most other games look quaint by comparison. With a team of talented artists at the helm and the backing of one of gaming’s biggest publishers, Ruined King can give the flashy anime RPG a run for its money.

Ruined King features some fan-favorite League Of Legends characters, but you don’t need to have played the MOBA to enjoy this fantasy pirate adventure. If there are more RPGs of this quality on the horizon, the future is bright indeed.

Get Ruined King on Switch

Get Ruined King on XBox

If you think a small studio can’t make a Triple-A quality game, Edge Of Eternity will change your mind. This positively gorgeous RPG boasts a vast world to explore within a unique setting and story. The game’s alien landscape is both familiar and new, making Edge Of Eternity a game that JRPG fans of all stripes should play.

In case you need a little push to seal the deal, consider that Edge Of Eternity’s gorgeous soundtrack was composed by Yasunori Mitsuda. That name should sound familiar, since he’s also the composer behind the Xenoblade series and Chrono Trigger!

Get Edge Of Eternity on Steam

Get Edge Of Eternity on Switch

Yoko Taro is known for games like Nier Automata, with mind-twisting plots that change the way players look at games. The new and growing Voice Of Cards series is one of his more approachable works, but it still has that Taro-esque flair.

Each fantasy adventure in Voice Of Cards is told through a deck of cards, with different story elements and surprises being drawn each time you play. It’s a unique blend of board game and JRPG, and one you won’t soon forget. We recommend starting with the first game, The Isle Dragon Roars, but The Forsaken Maiden and The Beasts Of Burden will keep you engaged for a long time as well!

Get Voice Of Cards: The Isle Dragon Roars on Steam

Get Voice Of Cards: The Isle Dragon Roars on Switch

Get Voice Of Cards: The Isle Dragon Roars on PlayStation

The Legend of Heroes: Trails of Cold Steel iV

If you’re looking for a series that’s garnered as dedicated a fanbase as Persona, The Legend Of Heroes is a great place to start. With its enormous cast of characters and a setting with more detail than most fantasy novels, The Legend Of Heroes lets players feel like they’re witnessing the history of a living, breathing world.

Trails Of Cold Steel IV is the conclusion to a multigame epic, but you don’t need to spend hundreds of hours on the first three games to get up to speed. After all, why not dive right into the final showdown?

Get Trails Of Cold Steel IV on Steam

Get Trails Of Cold Steel IV on Switch

Get Trails Of Cold Steel IV on PlayStation